Welcome to our new weekly series, Friday Q&A. Each week our attorneys will respond to a question selected from the many received by direct and online submission. Have a question you want answered or topic you want to hear more about? Submit your suggestions to us by tweeting @TLOBJ or sending a message to our Facebook Page.

Question: What is a motion to suppress evidence?

The Amendments to the United States Constitution that are “fundamental to our concept of ordered liberty” have been applied to the States through the due process clause of the Fourteenth Amendment. Duncan v. Louisiana (1968). That includes the Fourth Amendment prohibition against unreasonable searches and seizures and the exclusionary rule requiring that evidenced gathered in violation of the Fourth Amendment cannot be used as evidence against a Defendant. The Ohio Constitution also contains a protection against unreasonable search and seizure. See, Article I, § 14 OH Const.

The exclusionary rule was created by Judges and initially applied only to the federal government. The United States Supreme Court first decided that the Fourth Amendment would prohibit the use of evidence secured through an illegal search and seizure in Weeks v. US (1914). Police entered the home of Fremont Weeks and sized papers that were used to convict him of transporting lottery tickets through the mail. The search was done without a warrant. The United States Supreme Court found that the removal of the documents directly violated Mr. Weeks’ rights; that allowing private documents to be seized and then held used as evidence would mean that the Fourth Amendment protection against that very action is of no value whatsoever. Mr. Weeks’ conviction was overturned.

The exclusionary rule was applied to the States through the Fourteenth Amendment in the United States Supreme Court case of Mapp v. Ohio (1961). In that case, Ms. Mapp was convicted of possessing obscene materials seized during an illegal warrantless search of her home for a fugitive. Ms. Mapp appealed her conviction on First Amendment grounds, which were brushed aside by the United States Supreme Court when it declared “all evidence obtained by searches and seizures in violation of the Constitution is…inadmissible in a State court.” The Mapp decision applied the requirement of excluding illegally obtained evidence to all levels of government. 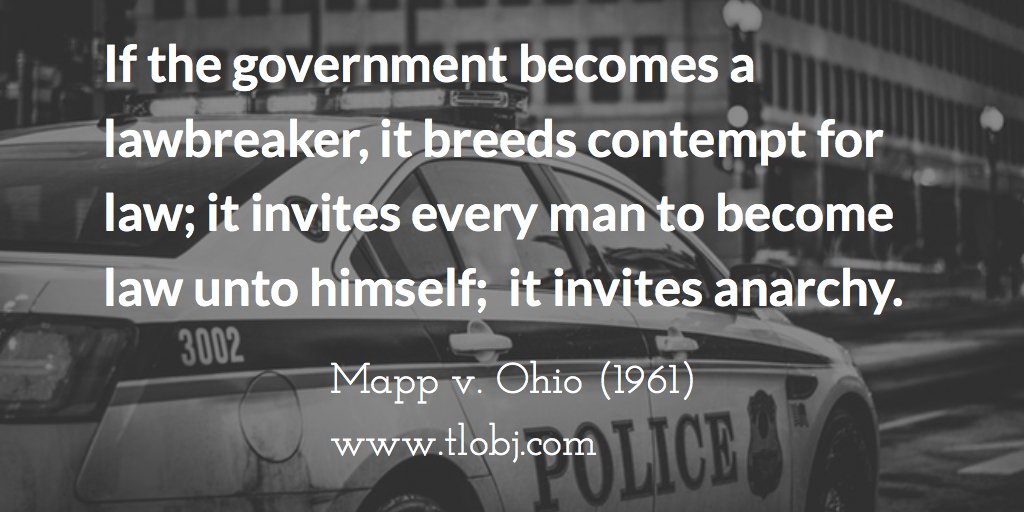